The cat is finally out of the bag!  Jenny/Cashmerette has launched her new pattern line, aimed at curvy sewists. For the first time that I'm aware of, we have a pattern designer who's actually targeting those of us who wear a cup size larger than a D/DD-cup. Jenny actually uses three different pattern blocks--separate ones for for C/D cups, E/F cups, and G/H cups.

Given that one of her favorite garment types is a wrap dress, it probably comes as no surprise that her first pattern release is a wrap dress--the Appleton Wrap Dress.

I had the pleasure of testing this pattern back in August, and while I'm normally hesitant to share "pattern test" versions of the things that I make, I'm making an exception this time because I know that many of you are probably curious about the sizing, etc, especially with this being a new pattern line. Plus, I'm pretty happy with my dress and have been wearing it, so why not share? (As a side note, that test coat pattern that I've been hinting about turned out pretty awesome, so I will be sharing that one too, when the pattern is released. Note that that pattern is from another pattern designer, though.)


A quick note about this photo shoot...  I'd really wanted to get this blog post up today because I suspected that a lot of you would be curious about this pattern. I'd had a bit of a heads up that this release was coming, but our last few mornings had been quite drizzly and unsuitable for outdoor photography. (I usually try to take my blog photos in the morning before I leave for work so that I look a bit fresher, etc.)  I got up extra-early this morning so that I could park at my local park-and-ride and take my commuter bus into work...only to discover that when I was ready to take photos right before I left, the sun hadn't come up yet!

Obviously, I couldn't take dress photos in the dark, so I went ahead and drove to the park-and-ride, hoping that the sun would be up soon. I knew that there was a little park/bike path off in the most remote corner of the P&R, so I gambled that the sun would be up after I snagged one of the last few parking spaces but before I needed to catch my bus. The resulting photos obviously aren't great and are a bit dimly-lit thanks to the sun just coming up, but I figured that dimly lit photos were better than no photos and delaying the blog post.

On to the actual pattern write up...

Again, note that I am talking about the test version of this pattern. I know that Jenny has made some pattern changes, based on tester feedback.

For the main body of this dress, I used an ITY jersey from Gorgeous Fabrics. Yes, it has a purple paisley print, and yes, I do get Prince songs stuck in my head every time I wear this dress. I'd consider this fabric to be light-to-medium weight and fairly stretchy. I wanted something that would skim over lumps and bumps, rather than cling, for this dress, and this fabric fit the bill.

For the contrast bands, I used leftover fabric from a pair of leggings. The band fabric is slightly beefier than the ITY fabric used in the dress body.

I used the PDF version of this pattern for my test garment.  The PDF went together beautifully.  Jenny uses faint gridlines on the background of the pattern to help you line things up for taping. I haven't seen many other pattern companies do this, and it was a nice touch.


This pattern is available in Cashmerette's sizes 12-28, which equates to a 40" bust through a 58" bust (102cm - 147cm).  The pattern has separate front pieces for each cup size block, with sizes nested within a block. So, for example, if you're sewing a size 20 E/F for your bust, but need a size 22 for your hips, you can easily grade between the sizes of the nested pattern pieces.

Depending on what bra I'm wearing on a given day, my full bust measurement tends to be between 51" and 52" currently. However, taking the negative ease in this pattern into account, I chose to go up a size and sewed a size 24 G/H for my bust, a 26 for my waist, and back to a 24 for my hips.

If you're thinking about making this, you'll want to check out the finished garment measurements for your size. There's a LOT of negative ease in this dress. Knowing that I generally prefer my knit garments to have 10% negative ease at most (preferably less), I went up a size from the size chart for this dress. Ideally, I probably should have gone up at least one more size (and will do so in the future), but I wanted to keep this pattern test as straightforward as possible for Jenny.

Note that I'm short (5'2") and did not make any length adjustments to this dress.

There were a few places where I felt that some of the pattern pieces could have been better labeled and marked, and my understanding is that these changes should be present in the final pattern.

The pattern instructions were nicely detailed and used a sensible order of construction. The accompanying illustrations were clear and appropriate for the construction steps. I'd rate this as an "Advanced Beginner" pattern.

And in line with Gillian's Better Pictures project and in honor of Jenny's signature twirls, I tried to incorporate a few twirling shots into this morning's photoshoot. You can see that I've still got work to do to try to figure out how to get sharp pictures while incorporating motion, but do I get a participant ribbon for trying?

Finally!  Someone is designing for us busty women! I've been looking forward to Jenny's pattern launch for a while now, and I'm really happy to see the largely positive feedback that I've read so far online.

I really hope that she's able to remove the "FBA hurdle" that a lot of newer and time-constrained sewists face by offering pattern sizes for those of us who are larger than a D-cup. Less time for FBAs means more time to actually sew!

Note: As a pattern tester, yes, I did receive the pattern for free, but this review reflects my own opinions.
Posted by Michelle at 12:33 PM 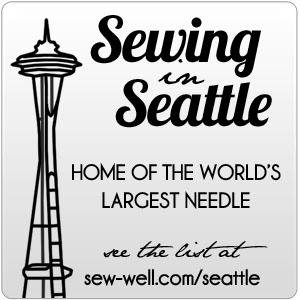